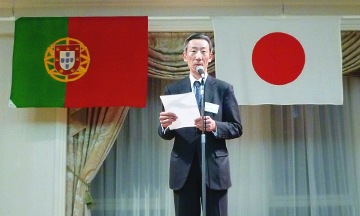 Our founder, Katsutaro Inabata, studied in France for eight years from 1877, and was an active promoter of cultural exchange and friendship with other countries through private diplomacy. He was appointed honorary consul to numerous nations, including Portugal, France, Belgium, Poland, Cambodia, Ethiopia, Bolivia, and Czechoslovakia.
While exchanges with other countries were halted during World War II, Portugal remained neutral, so the relationship continued without hindrance.
Following in the footsteps of our founder, who served as vice-consul for Portugal in Kyoto, our second president, Taro Inabata, was appointed as honorary vice-consul in Osaka. The fourth president, Katsuo Inabata (now counselor), was the first president of Sociedade Luso-Nipónica de Osaka, which means Portugal-Japan society of Osaka.
This tradition of private diplomacy, which started with our founder, remains part of our heritage to this day. The current president of Inabata & Co., Ltd. Katsutaro Inabata, is actively promoting friendship and exchange between Japan and Portugal, as honorary consul in Osaka and as president of Sociedade Luso-Nipónica de Osaka. 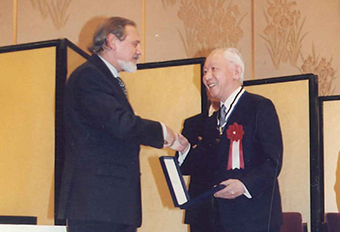 Then-President Katsuo Inabata honored as Grand Officer of the Order of Prince Henry* for his long years of service to economic and cultural exchange
(Nov. 20, 2001, at Rihga Royal Hotel Osaka)

Inabata's relationship with France goes back to the latter half of the nineteenth century when Founder Katsutaro Inabata studied dyeing in France, which was one of the state-of-the-art technology in those days. Upon returning to Japan, Katsutaro not only started importing dyestuffs and dyeing/weaving machinery from France but also made efforts to develop cultural exchanges between the two countries. Today, Inabata & Co. continues to promote mutual understanding and friendship in a variety of areas related to Japan and France. Inabata currently sponsors the Academie de Musique Francaise de Kyoto, which is operated by the Institut Français Kansai, and also supports the Societe franco-japonaise d'Osaka.

In 1926, the then French Ambassador to Japan, Paul Claudel, and Katsutaro Inabata established a foundation for Franco-Japanese cultural exchange in Kyoto to promote French language education and cultural exchange.
In 1927, Kansai Franco-Japanese Institute (KFJI, Institut Franco-Japonais du Kansai) was built by the Kyoto foundation in the Kujoyama district of Kyoto. Katsutaro, who was also the Chairman of the Osaka Chamber of Commerce and Industry, asked business leaders in the Kansai region for their cooperation to the building of the institute. Katsutaro also played a key role when the Institute was relocated to its current location in front of Kyoto University in 1936. 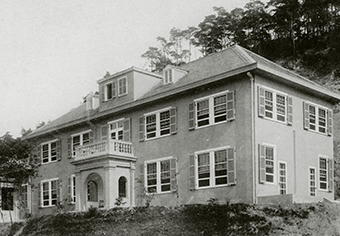 KFJI's current building in front of Kyoto University, refurbished in 2003

The Kansai Franco-Japanese Institute changed its name in 2012 to become Institut Français Kansai, continuing to serve as a center to disseminate French culture to the Kansai region. The Inabata Group sponsors the Academie de Musique Francaise de Kyoto, which is operated by the Institut Français Kansai.
Meanwhile, when Société de Rapprochement Intellectuel Franco-Japonais (now Villa Kujoyama) was erected in Kujoyama on the site of the old Kansai Franco-Japanese Institute, Inabata fully cooperated with the construction as part of Inabata Group's centenary events. An ad hoc team to prepare for the construction was set up inside the head office of Inabata, and Inabata also asked its business partners for cooperation. Under the direction of then-President Katsuo Inabata, all the staffs at Inabata worked together to help bring this project to fruition.